War Girls depicts the complex and evolving relationship between two sisters in the middle of a futuristic war as we learn about their pasts and they struggle to dream of a future.
Book CWs for body horror, murder, war, child soldiers, major character death.
This book is a strange kind of visceral, paying attention to dirt and grime as much as it depicts sensory extension through technology. It's mainly from the perspective of two child soldiers in a futuristic Biafran/Nigerian war, each cyberized in different ways. Onyii's augmentations are mostly physical, replacing body parts which have been taken or lost while fighting. Ify's augmentations expand her world, letting her extend her senses and gain a sense of control over her surroundings. It did a good job of communicating the experience of using technology in a visceral way rather than getting bogged down in exactly how the future-tech worked.
There's a theme of child soldiers growing up to direct new children to be soldiers, themselves contributing to the same violence that wrecked their childhoods. Sometimes they are still children while directing even younger children on how to kill. This was absolutely on purpose and it's woven through the whole book. They are also trying to, successfully or not, grapple with what that means. It's filled with grief and anger, and what happened and what could have been.
Early on the book has a lighter narrative tone, it shifts to become grimmer later on as they are older, more aware of the toll of the violence they're taking part in. The early book isn't any less gruesome than the later sections, but the framing subtly shifts to more fully realize the horror around them as Onyii and Ify grow up. For me the turning point was when the abd are introduced, from that point on the self-awareness ramps up.
It's very good and I highly recommend it. The characters are fantastic and strong; the relationship between Onyii and Ify is complex and becomes more nuanced throughout the book; and it has a good balance between showing some of the horrors of war and having many moments of joy to keep from being too depressing to read. It's probably not a good book for cheering up, but you should definitely read it when you're in the right headspace for something emotionally complicated.
CW for body horror, murder, war, suicide, child soldiers, references to torture, major character death.
Bookshop Affiliate Buy Link 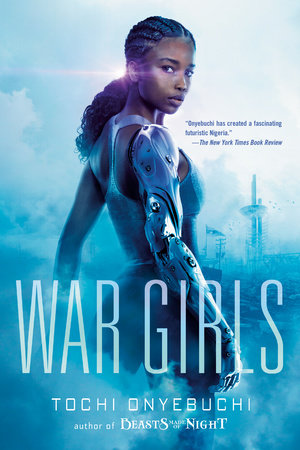