The Ballad of Songbirds and Snakes by Suzanne Collins (The Hunger Games, #0.5)

The Ballad of Songbirds and Snakes walks a fine line of explaining a villain without excusing him. A good balance of exhilarating and creepy. It fits well within the world of The Hunger Games, showcasing some intriguing origin stories.
The way we slowly get into Snow's head is very compelling. It was always very clear why he does what he does, while still making sure that the reader is shown other options through other character's objections or through thoughts Snow rejects when weighing various courses of action.
There's a lot to like here, and a lot to love to hate. In particular I like seeing this early version of the Games, how it hinted at the controlled and sleek production of the main trilogy but it's very far from achieving that just yet. The songs are handled wonderfully and it was exciting to learn the origins for some of the ones from the original books.
Overall this is a good addition to The Hunger Games which could probably be read either before or after the main trilogy (if you haven't read any of the series before). I don't know if this would grab someone who disliked the main series, but Snow is a very different narrator from Katniss so it might work even in that case.
Book CWs for starvation, murder, body horror.
Bookshop Affiliate Buy Link
---
The rest of this review contains minor thematic spoilers for the main trilogy.
Snow is humanized and made understandable by this book, but I think it manages to do so without excusing his terrible actions. There's a lot of subtle (and eventually not so subtle) moments where Snow is present when someone else puts forth a more compassionate course of action and Snow either disagrees completely or accepts the outcome while thinking about how this can be used to his advantage. When people do terrible things it's often because they either evaluate their actions without taking suffering into account, or because they think that the victims will deserve what happens. Both are in play here, for Snow blames the people of the Districts for the war in general and his family's current situation in particular. I didn't come away from this book liking Snow any better and I don't think I was meant to.
Depicting a villain who went through some of the same things that the protagonists from the main trilogy did was an interesting choice that ended up working out well. We learn right away that Snow spent his childhood food insecure and on the edge of starvation, so a lot of his actions are motivated by never wanting to be in that position of helplessness ever again. It continues the theme of "hunger", since in the original books that hunger reached outside the Arena to permeate every bit of the protagonists' lives, now we find out that in the early years during and after the war that hunger reached into the Capitol.
We discussed the original trilogy on our podcast, including its portrayal of hunger and starvation, you can find those episodes here: https://www.booksthatburn.com/category/suzanne-collins/ 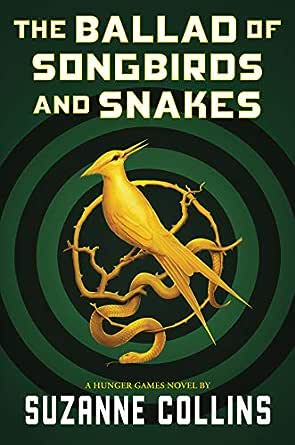