Gertie and Bridget have a mission.

After sorting through the odds and ends they found at a yard sale, they've found a buyer for an unusual statue. The only problem is the buyer is on the other side of the country.

With no alternative methods available, Gertie, Bridget, and their friends hop in a purple minivan and set off across Crescyth. Of course, any road trip has it's problems, but between a chaotic gas station stop, a dangerously malfunctioning zoo, and an enigmatic campsite encounter, Gertie and Bridget are starting to think they've bitten off more than they can chew.

And, of course, there's the little matter of actually delivering the highly sought after package into the right hands.

It's just supposed to be a routine road trip, but of course, adventures are never as mundane as they first appear.

*I received a free review copy in exchange for an honest review of this book.
Queer Rep Summary: No canon queer rep.
Tales of Mundane Magic: Volume Three takes Gertie, Bridget, and their friends on a road trip, exploring even more fun magic stuff (plus some creepy things) as they deliver a very special macguffin. A little more grounded without taking things too seriously.
This book feels more mature than the previous volumes without it being jarring. It's less glib while still feeling very fun and adventurous. I know I previously said that Volume Two felt a bit more mature than Volume One, and I stand by that. I'm not sure whether Volume Three is more mature than both of them or if it just keeps the tone at the same level as Volume Two, but it happens so soon after Volume Two that either would be appropriate. The road trip setting is a nice way to make sure the series feels fresh after two volumes set at the same school, and it works wonderfully.
The macguffin is nice, it didn't feel like a plot contrivance while I was reading and it's only as I try to describe its role without spoiling what it is that I realize it was a macguffin at all (which is a good sign for how well it fits). I'm enjoying Vivien's continued presence in the series, I think she's my favorite. More generally I like how everyone has a very distinct expertise or style of magic. It builds an ensemble of characters without anyone feeling gimmicky. I like how Faye and Gertie have specializations which are tied to collections of enchanted objects (charms and hats, respectively), as a plot device it allows for problems to be exactly as solvable as they need to be since we don't know all of what they have, but they have a lot of them. I know that was true in the previous volume, but it Faye really gets a chance to shine here in the way that Gertie did in the first two books.
I like the trend of having one or two pretty creepy stories, but mostly in a fridge-logic kind of way. If you think about them, the implications are terrifying, but if you stay at the level of the main narrative they're not unduly stressful. There's a kind of shrugging, a "well I guess this is a thing to figure out" attitude that is part of why these books can feel so light even when some darker things happen. It's a confidence, that between them all they'll figure it out. One big shift from the previous books is that here's it's clear that they're aware of at least some of the consequences if they fail, whereas in Volume One I wasn't sure if they realized what it could mean if things didn't work out.
Overall this is a great addition to the series, it's nice to have this group share a (mostly positive) bonding experience after the rather tense events at the end of the last book. My favorite story in the main sequence was at the rink, and I'm very exited for future developments off of the bonus story with Theodore.
CW for guns.
Books That Burn interview with the author.
Bookshop Affiliate Buy Link 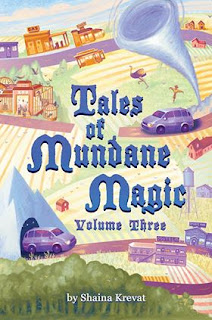