The Battle of the Labyrinth by Rick Riordan (Percy Jackson and the Olympians, #4)

The Battle of the Labyrinth is about turning points and choices. It builds on the previous books to ask what Percy and his friends will do with what they've learned, how will they be different from their parents?
I'm looking forward to the answer to that question in book five, especially after the events of the birthday party in the book's conclusion. Thematically, I'm very excited that this book, for kids, about choices, touches on their ability to be separate from their parents, to want different things and be different people. But, it also has room for the ones who either haven't yet or maybe never will decide to be separate.
Including Janus was a nice touch, and I'm very excited to see what happens next with Nico. The flashbacks with Daedalus showed me parts of his mythos that I'm not as familiar with. This isn't the first time Percy has had visions of the past, especially past heroes of one kind or another, but they were particularly well-handled here.
I continue to be impressed by the modern interpretations of mythic elements, particularly the Labyrinth. Grover's search is well-handled, and the way Percy was repeatedly separated and reunited with his main party kept the narrative from getting stale. The fruitless or potentially repetitive sections could be spun off and rejoined at the best parts, while still conveying the helplessness and frustration experienced by the characters who didn't get to skip over them.
I wrote my opening sentence of the review, that this is about turning points and choices, then kicked myself because, duh, they're in a labyrinth, but what made me seize on that as the theme was everything else except the literal choices in the labyrinth. Janus, Calypso, Nico's decision, Luke's plan, Percy's obliviousness to the dynamic with Annabeth and Rachel... It shows how well-written this is when I was trying to think of the theme, and the elements that drew me to it were everything except the very obvious metaphor in the title itself. I can't say whether it's more cohesive than the others so far, but I enjoyed this one the most. It feels very complete, like every thing here was working together for this really good story. Part of that is that it's book four, it has the weight of the first three behind it so it wasn't as bogged down with introductions and world-building and it could just... fly.
Bookshop Affiliate Buy Link 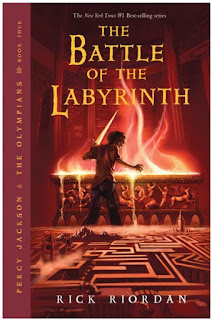