Tales of Mundane Magic: Volume One by Shaina Krevat

Nothing too strange ever happens to Gertie and Bridget Mallon.

The sisters don’t have magical adventures fighting off dark lords or saving the world. Gertie spends her time learning the skill of enchantment, and Bridget has the ability to see things no one else can see with her left eye, which was bewitched in an accident many years ago.

Sure, they attend Flories Boarding School, where Gertie takes a potions class and Bridget plays basketball, and the occasional magical anomaly takes place, but who doesn’t deal with the occasional poltergeist or curse?

Life is relatively calm for the Mallon sisters, but things might not be quite as mundane as they appear.

*I received a free review copy in exchange for an honest review of this book.
Queer Rep Summary: Genderqueer/Nonbinary Minor Character(s).
Tales of Mundane Magic: Volume One is a magical slice-of-life story of two sisters in boarding school. It artfully balances fun with a sense of grounded-ness, building a world where magic is as ordinary and fun as playing catch with your ghost dog.
My main emotion after finishing this book is fun, it's not shallow but it's generally very happy and confident, which was nice after reviewing some darker things recently.
The book is told as a series of vignettes in the lives of two teenage girls in a quasi-modern world where some people have magic. There are definite connecting threads between the stories, both thematically and in terms of recurring characters. There isn't some grand overarching problem to solve, just a series of magically-involved incidents in their lives. Some elements of earlier stories provide the solutions to later problems because they have implied continuity of existence behind even though we only get small slices of their lives. It has a light and fun feeling despite taking us to a funeral in chapter two and implying some pretty dark realities later on in the book. It's generally breezy and whimsical, to the two girls every problem has an easily discernible solution but the magical nature of them made it feel novel and fresh to me as a reader.
Part of why I like this book is they and their friends are fully teens, with a confidence borne of not knowing how easily everything can turn out badly, and enough prowess and understanding to make some very interesting things happen.
CW for death.
Books That Burn interview with the author.
Bookshop Affiliate Buy Link 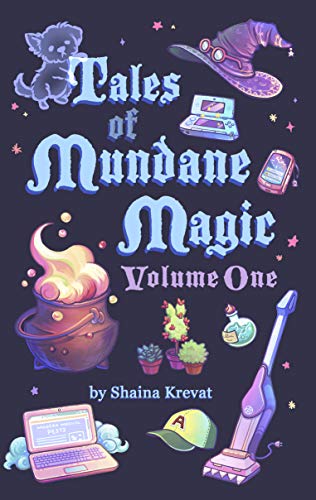