The Ellimist Chronicles by K. A. Applegate

The Ellimist Chronicles tells the story of a young Ketran from millions of years ago eventually becoming The Ellimist who intervened with The Animorphs as part of a galaxy-spanning fight against Crayak. This is my favorite book in the entire series. 💜

Toomin was a Ketran gamer kid who played VR under the name "Ellimist". For the rest of the story, you should just read this book. If you never intend to read the rest of the series, please, still check out The Ellimist Chronicles. It stands alone well-enough that I read this one separately from the main series over and over as a kid (that also says a lot about me). His journey is believable, the stakes and the scale ramp up in really interesting ways, and I love to hate the section on the watery moon with Father.

It has some of the feel of excellent portrayals of long-living elves in fantasy works, where small moments are important but a longer scale and slower rhythm must also be attended to. Specifically I'm thinking of R. A. Salvatore's portrayals of Drizzt in The Forgotten Realms, but there are others.

The Ellimist's story is dark but hopeful, he's desperately trying to win at a "game" where the stakes are the happiness and well-being of all life. It's a mature voice looking back on his early and middle life in development but not quite in time. The sheer scale of eons covered here is immense, and I love the teeming universe that we see here in a way that is implied but not specified in the main Animorphs series. 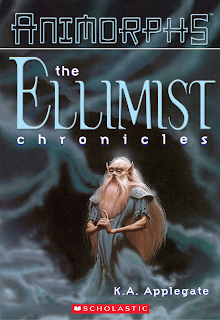