Animorphs Book 53: The Answer by K. A. Applegate

Damn. Jake's trying his best but a lot of beings are going to die, and he's responsible for it. He does everything he can, and it's both too much and not enough. No one is going to be okay when this is over, even if they live.

It's damn hard not to hate Jake in this one. It really is. Maybe that's because I identified with Tobias when I was a kid, maybe it's that this read-through now has me loving Rachel as a character. But I have enough Marco enough to see the bright line.


I see how he got there, but Erek didn't deserve this. None of them deserved this. This one really affirms for me the central thesis of our podcast: The authors are the only ones with agency. Jake is doing his best, and no matter what he does, a lot of beings are going to die, and the author is the one who put him there.

This series is really great, it's amazing, you either love them or you didn't read them. I've yet to meet anyone who read the series and was ambivalent.

I've only read this one once before because I read The Ellimist Chronicles first and knew the end would have things I didn't like, but this one still hurts.

Some random thoughts: Arbron was great, I like the Taxxon endgame and I hope it works out. Tom's Yeerk is terrible (great character, terrible person). I like seeing Toby grow up since the start of the series. We found out how much time has passed and how young the Animorphs are, and it's a good answer, but it's heartbreaking that they were so young. 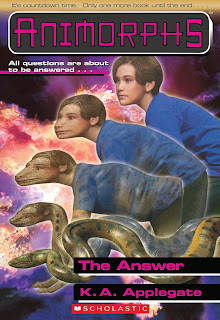