Animorphs Book 52: The Sacrifice by K. A. Applegate

Ax is pulled between Andalites and humans. Cassie confesses to her actions from The Ultimate, starting to repair the rift with Jake. The Animorphs experience one of their greatest victories, but at a high cost.

Ax is horrified by Cassie's actions and by the other Animorphs' responses to her. He puts himself on the line in their biggest mission yet, partly to try and resolve his internal conflict.

I'm glad to see that the new Animorphs are working well so far, it's an addition that makes sense at this point and is being handled well in the story. They could have been sidepieces but are portrayed as having important roles in ongoing missions.

Ax is an interesting point of view character, he spends what feels like too much time being continually surprised that humans are complex and contradictory, but that's really hard to balance. It's not badly done, but it feels like three books from the end is pretty late to finally side with them once and for all. 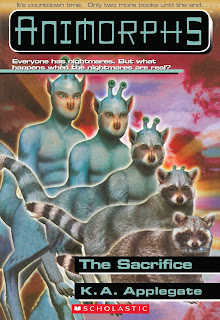