Animorphs Book 51: The Absolute by K. A. Applegate

The Animorphs deal with morphed Controllers when trying to reach/rescue the governor. We see signs of the rift between Cassie and Jake after The Ultimate. This feels closer to the high-tension missions of the early books, but escalated.

I like the layers at play in the first scene with the governor, it's short but really well done. The way they nickname people until they get a name for them (if they ever do) is funny to me. It's really effective and it's a subtle way of adding more description to the scene without having them catalog everyone's looks.

This story is a combination of a holding action with an escalation, or more of a transition from just fighting holding actions to getting other levels (or any level) of normal people involved.

I, also, can't believe it took them this long to morph ducks for long-distance flying, that seems like a great idea. 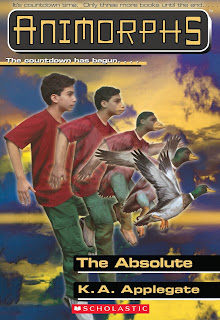