Throne of the Crescent Moon features a city stalked by nightmarish creatures, protected by the weary and the young, brave in the face of monsters the officials deny. Excellent ensemble, thrilling action, and much conversation.
The characters are well-balanced, the mix of the two young warriors with several older comrades/mentors is a nice mix of zeal and experience. The monsters are suitably creepy when shown and menacing when half-viewed. There are several antagonists, operating at different levels in the story. It's enough to mean that the heroes keep facing danger without constantly running into the exact same villains/obstacles at every turn.
I like the pacing, the beginning was exciting, the middle was tense in a "need to figure out how to manage this, many fetch-quests" kind of way, with a few confrontations and an action-heavy conclusion. The slower middle sections were well managed and never were boring, just as one person's goals were stymied we followed a different member of the group as they solved their piece of the whole situation. It made it feel a bit like a mystery without really being a mystery story, and the overall effect worked well.
Stories that have a lot of discussion, a lot of "figuring out", and complicated politics to navigate are a particular favorite of mine, and this has all of that. I care about that stuff more than the action scenes, usually, so to me this book feels dialog-heavy. But as I flip back through the book to refresh my memory, I keep coming across action scenes so I suspect that it's more balanced and will appeal to people who like more action than conversation, as well as people like myself.
CW for murder, body horror, mutilation, death.
Bookshop Affiliate Buy Link 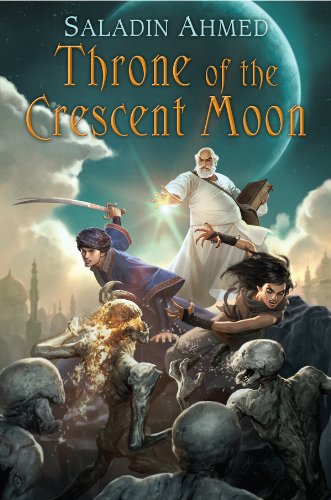