The Sea of Monsters by Rick Riordan (Percy Jackson and the Olympians, #2)

Percy meets one of his half-siblings and has to deal with more implications of his immortal parentage. Grover's search goes awry, Clarisse's quest is similarly troubled, and Percy is failing at his efforts to be innocuous.

I enjoy the dynamic between Percy and Tyson. Not where it is at the start of the book (Percy had to work through some things), but I like where it ends up. Grover's captivity is VERY stressful, and as much as I wish he'd gotten his answer, his quest is too big to be solved in book two, so I think that was the right choice.

There's a lot of terror and pain in this one. These are books for kids, but they are pretty deep. A lot of the depth and complexity comes from understanding the implications of various plot points, but there's enough detail that it's clear that it was on purpose. This applies to everything from Percy's mom's dynamic with Gabe in the last book (a very abusive relationship with her as the victim), to the little hints of her moving on that we get in this one. These books aren't about her, but it feels like she's a full person who just isn't the focus, rather than having thin characterization.
Bookshop Affiliate Buy Link 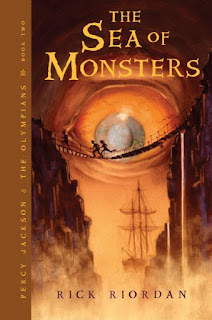