Binti: The Night Masquerade is a fitting end to the Binti trilogy by Nnedi Okorafor. The combination of action-packed climax with a lot of cool-down and aftercare makes the trilogy, and this stage of Binti's journey, feel complete in a way I wasn't expecting, but I appreciate.

The pacing is strange to me. I like how it concluded, but I was startled by spending almost half the book on what felt like falling action and conclusion, with the dramatic high-point nearly dead center. This, for me, cements my feeling that these shouldn’t be read as three separate books, but read together in short succession as one large story. When taken that way, the proportions feel better for every part of the story. After so much trauma, it felt good to have so much aftercare and literal healing be giving a large section.

Overall, I liked this book in particular and the trilogy in general. Though, I kept feeling off-kilter because I haven’t read a story that felt like this before, and I think that’s a good thing for me as a reader, especially when it was done so well.

The therapist’s perspective was relayed so directly in the end that it was a little jarring, but I think it makes sense when part of Binti’s problems were that so much that was important was unsaid, and she had a lot to process. It works, but I definitely didn't expect the tone, nor the brevity of that interaction right at the end.

It’s far from my favorite series, but I would recommend it.
Bookshop Affiliate Buy Link 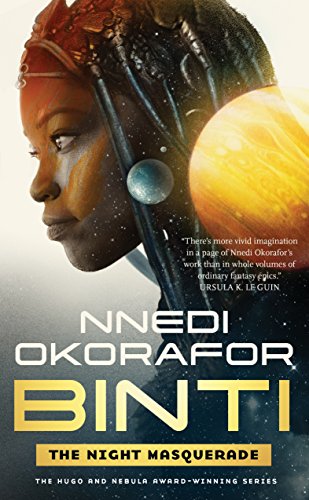