Binti: Home deals with anger, grief, and confusion, heading towards catharsis but still feeling tense for much of the book. Binti intends to take one journey but finds herself on another. It feels on edge, waiting for something to happen.

This book is full of grief and anger, and it feels more like part two of one long book rather than a second book in a series. It can be partially understood separately from Binti, but Binti needs this sequel in order to feel complete. This has the processing and the aftercare that Binti sorely needed, and ends with a taste of the action yet to come in the third book (which I will read next).

This deals with several kinds of cultural prejudices, including a book-specific form of colorism, as well as xenophobia both with literal aliens and with various groups of humans.

It's hard to describe well because after finishing it I mostly feel tense. Even though a lot of things were processed and there was a very specific moment of catharsis, it was aftercare for one tragedy while re-contextualizing a lot of Binti's past in order to illuminate ongoing tensions and break the illusion that her existence before her travels was calm. Her journey had previously been framed in terms of running towards something, and now it appears that she also had some things to run from, whether she originally understood it that way or not. 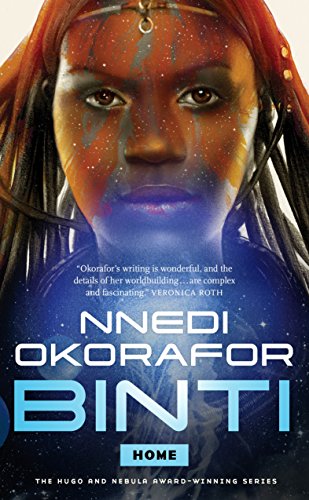